Paul Aizpiri was a painter and sculptor born in 1919 in Paris, France to an Italian mother and a father from the Basque Country, Spain. Aizpiri was an optimistic person since birth, a disposition reflected by the vibrant colors and the unrestrained brushstrokes characteristic of his works. His signature compositions always had a touch of friendliness with his integration of Fauvism, Expressionism, and Cubism. He died of pneumonia on January 22nd, 2016, at the age of 96. His Works are exhibited permanently at the New Vision Gallery (Jerusalem).

In 1936, he started studying at L’École des Beaux-Arts, and his reputation was built as he held his first solo exhibition when he was 24. In 1939 Paul Aizpiri escaped from a German prisoner of war camp in Brittany and made his way back to Paris. In 1946, he won a prize at the Salon de la Jeune Peinture, and exhibited his works along with those of the most influential post-war painters, including Bernard Buffet and Paul Rebeyrolle. 1956 was the year his path as an artist was altered, that year he met with Foujita, Soutine, Van Dongen, Utrillo and Picasso, who greatly influenced his style and work. From the 1950s, famous galleries all over the world started to invite him for solo exhibitions. In 1996, an Aizpiri museum (Nakata Museum of Art) opened in Japan, which is a rare honor for living artists. He was the founder of "Salon des Moins de Trente ans". He was a member of the October Salon since 1945, and was also an active member of "Salon d'Automne", "Salon des Independents" and of the Tullerias.
Product Compare (0) 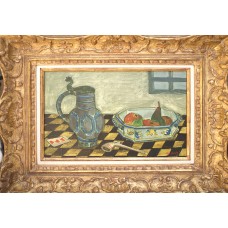 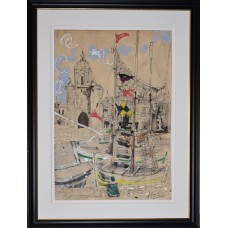 Gouache, Ink and Watercolor on Paper