Born in Japan, Dobashi studied art in Tokyo before visting Paris for the first time in 1938, it was to become the beginning of a long love affair with the city, and would lead to him living in Paris permanently between1953 and 1969. The artist’s work is held in many important collections in Europe and America.

Having been a member of the influential “Shinjuki” group in Japan, Dobashi held his first solo exhibition in Paris in 1954, and went on to exhibit regularly at Galerie Fricker. He also exhibited at the leading avant-garde salons such as the Salons d’Automne, Salon de Mai, (1956, 1957, 1958, 1960); Salon des Comparaisons, (1960); and in 1958 he was invited to show at the prestigious École de Paris exhibition at Galerie Charpentier, and also the avant-garde show “Luminosite” to critical acclaim. Dobashi went on to establish an international reputation, exhibiting in numerous group shows in Europe and America.
Product Compare (0) 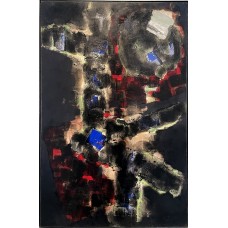