Alfred Manessier (5 December 1911, Saint-Ouen – 1 August 1993, Orléans) was a non-figurative French painter, stained glass artist, and tapestry designer, part of the new School of Paris and the Salon de Mai. He was the victim of a car accident in Loiret on 28 July 1993, and died four days later at the Source hospital in Orléans. His funeral was held at the church of Saint-Sépulcre d'Abbeville and he was buried in the Cimetière de Saint-Ouen at his birthplace.

He had enrolled in architecture in 1929, switched to art with Roger Bissiere at Académie Ranson in 1935. In 1939 Manessier was called into military conscription, as a technical draftsman. In 1940 he found work as a farmhand to support the growing family. In 1941 he returned to Paris to exhibit in the Gallery Braun show "20 Young Painters". Manessier left teaching in 1943 for painting full-time. In 1947 he was commissioned to produce two stained glass windows for a Breseux church. In 1949 he produced a tapestry for the Dominicans of Saulchoir, Seine-et-Oise.
Product Compare (0) 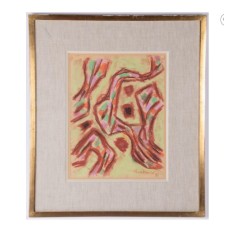