Bentley, born in New York City, studied at Northwestern University and the Art Institute of Chicago. From 1941 to 1945, he was in North Africa with the armed forces and in France. An interest in pre-Columbian culture and the Indians of Mexico and the primitive arts of Africa took him many times to those places and had a strong influence on is painting style. He also became a collector of African, Oceanic, and pre-Columbian art.

A painter, lithographer, and muralist Claude Bentley was based primarily in Chicago, and was also a teacher at Layton School of Art in Milwaukee, Wisconsin; the Art Institute of Chicago; and the North Shore Art League in Winnetka. In addition, he gave numerous lectures and demonstrations. The forms in his paintings reference geometric shapes and the simplicities of primitive art. As a muralist, he completed commissions for the Plaza del lago Shopping Center in Wilmette and 3600 Lake Shore Drive Building in Chicago. In 1949, he became a member of the Chicago Society of Artists.
Product Compare (0) 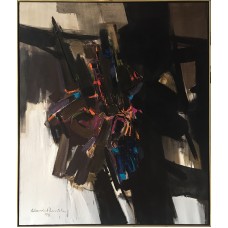