Born in 1920 in Écouen, Huguette Arthur Bertrand spent her childhood in Roanne (center south of France) and settled in Paris shortly after the war. She attended the Académie libre de la Grande Chaumière. Huguette Arthur Bertrand became friendly with publishers, critics (Michel Ragon) and abstract artists. During the 1950s, the painter applied the full force of her art and the confidence of her artistic vocabulary made from stripes that hatch, streak, give rhythm to compositions. In 1949 and 1950, she participated in the key exhibition Les Mains Éblouies (The Dazzled Hands) at the Galerie Maeght. Huguette Arthur Bertrand died in 2005.

Her works began to travel abroad, a solo exhibition was held at the Brussels Palais des Beaux-Arts in 1956, and crossed the Atlantic: in 1956, the Meltzer Gallery in New York organized a solo exhibition in 1956, praised by critics, then a group show the year after: North and South Americans and Europeans. Also in 1957, the painter Huguette Arthur Bertrand participated in the exhibition New Talents in Europe at the University of Alabama. In 1958 and in 1960-61, she exhibited at the Howard Wise Gallery in Cleveland. A painter, lithographer, and muralist Claude Bentley was based primarily in Chicago, and was also a teacher at Layton School of Art in Milwaukee, Wisconsin; the Art Institute of Chicago; and the North Shore Art League in Winnetka.
Product Compare (0) 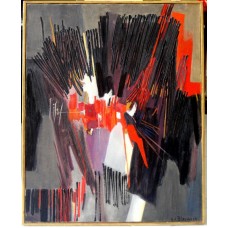