Born in Paris on 10 July 1928, Bernard Buffet was a painter, lithographer, and etcher who studied at the Paris École des Beaux-Arts and gained early critical acclaim and fortune through his prolific output – he painted more than 8,000 works in his lifetime – and immediately recognizable stylistic manner. Active during a time when abstraction was the predominant artistic style, Buffet defended representational art and was an active member of the anti-abstraction group L’homme Témoin (The Witness-Man).

Bernard Buffet was renowned for austere figurative paintings infused with social critique. Featuring thick, spiky black outlines and a restrained palette, Buffet’s landscapes, portraits, and still lifes were angular and confrontational—a stylistic choice that reflected the alienation and anxiety of his post-war generation. Art history, death, sexuality, politics, and religion were frequent themes throughout his oeuvre. Buffet was a prolific creator, producing around 8,000 artworks during his lifetime. He enjoyed wild success, then a spectacular critical downfall beginning in the 1950s; today, scholars are once again celebrating his legacy. His works can now be found in the collections of the Centre Pompidou, the Tate, and the Museum of Modern Art. A museum in Japan is devoted exclusively to Buffet’s practice. At auction, his work has sold for seven figures.
Product Compare (0) 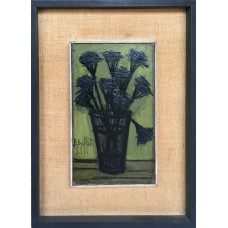