Hugo Consuegra (born Hugo Consuegra Consuegra Sosa October 26, 1929 in Havana, Cuba – January 25th 2003 in New York City, New York) was a Cuban-American architect and artist specializing in graphic design, painting, and engraving. He received music lessons in piano at the Conservatorio Hubert de Blanck in Havana, between 1941–1947. Consuegra also studied at the Escuela Nacional de Bellas Artes “San Alejandro”in Havana from 1943–1947 and in 1955 graduated from the University of Havana in Architecture. He was member of the artistic group Los Once, along with other artists like Agustín Cárdenas and Viredo Espinosa. From 1970 until his death in 2003, he resided in New York City.

His first solo exhibition was held in 1953 at the Lyceum in Havana, and in 1954 he became one of the founding members of Los Once (The Eleven), a group of painters and sculptors who introduced abstract expressionism to Cuba. His work was seen in many shows across the United States and in Europe. Consuegra was also Professor of Art History at Havana University’s School of Architecture (1960–5), he then went to Madrid in 1967 where he lived before moving to New York in 1970. He became an American citizen in 1975. Throughout his career, Consuegra widely exhibited his work in such cities as: Havana, New York, Paris, Cadiz (Spain), and Sao Paulo, among others. His work is part of major collections as, Casa de las Américas (Havana), Cintas Foundation (New York), Museo Nacional de Bellas Artes (Havana), Art Museum of the Americas (Washington D.C.), and the Rodríguez Collection (Miami), among others. He was awarded with the Cintas Foundation Fellowship.
Product Compare (0) 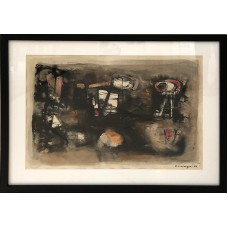