Samuel Lewis Francis (June 25, 1923 – November 4, 1994) was an American painter and printmaker. Sam Francis was born in San Mateo, California, the son of Katherine Lewis Francis and Samuel Augustus Francis Sr. He attended San Mateo High School in the early 1940s. Francis served in the United States Air Force during World War II. He received both his BA degree (1949) and MA degree (1950) in Art from the University of California, Berkeley, where he studied botany, medicine, and psychology.

He spent the 1950s in Paris. Between 1950 and 1958 Francis spent time and painted in Paris, the south of France, Tokyo, Mexico City, Bern and New York. After his 1953 painting "Big Red" was included in the 1956 exhibition "Twelve Artists" at the Museum of Modern Art, New York, Francis began a rapid rise to international prominence. Between 1960 and 1963 he created several series of works, including the "Blue Balls" series. In the early to mid 1960s Francis was represented by the Martha Jackson Gallery in New York City. Francis' works of the early 1970s have been referred to as Fresh Air pictures. In 1984 Francis founded The Lapis Press with the goal of producing unusual and timely texts in visually compelling formats.
Product Compare (0) 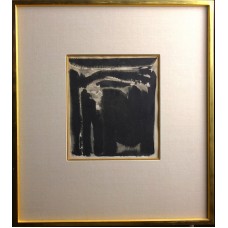 Signed and Dated on Verso 1950