William Gear RA RBSA (2 August 1915 – 27 February 1997) was a Scottish painter, most notable for his abstract compositions. Gear was born in Methil in south-east Fife, Scotland, the son of Janet (1886-1955) and Porteous Gear (1881-1965), a coal miner. He attended Buckhaven High School where he won the Dux Arts Medal (1932). From 1932 to 1936 he studied at Edinburgh College of Art where fellow students included Wilhelmina Barns-Graham and Margaret Mellis.

He first exhibited in 1934 with the Royal Scottish Academy and Society of Scottish . Called up for military service in 1940, and commissioned 2nd Lieutenant in 1941, during World War II Gear served with the Royal Corps of Signals. In 1948 he held his first Paris and London solo exhibitions, and visited Terry Frost, Patrick Heron, Roger Hilton, Peter Lanyon and Bryan Winter in St Ives. In 1950 William Gear moved with his family to England (Loosley Row, Buckinghamshire), and in response to an Arts Council invitation to produce a work for its "Sixty Paintings for '51" exhibition, he painted "Autumn Landscape", now in the Laing Art Gallery, Newcastle. In 1952, Gear produced the notable works, 'Early Spring' and 'March Landscape', both paintings similar in style, with abstract organic shapes in vibrant blues and greens. 'Early Spring' remained in the collection of Gear and remained with his Estate after he died.
Product Compare (0) 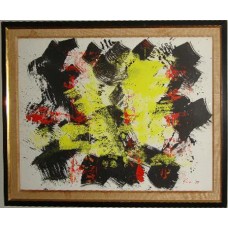