Jacques Germain was a prominent member of the Abstraction Lyrique group in post-war Paris, with Georges Mathieu, Vieira da Silva, and Riopelle. He was born in 1915 and died in 2001. As a young artist he worked under Léger at the Académie Moderne in 1931 and Kandinsky at the Bauhaus in 1932. But it wasn’t until after the war that Germain first exhibited his work, at the Salon des Surindépendants of 1947.

Painting with heightened gestural expression, Germain developed the powerful resonant style for which he is renowned. After 2 semesters at the Bauhaus, he went to Frankfurt where he studied with Willi Baumeister. With the Nazis took the power, he returned to Paris and started working in advertising. During the Second World War, the artist was a prisoner for three years. Upon his return to France, he dedicated himself to painting. In 1949, he had his first solo exhibition in Paris. Jacques Germain participated in many international exhibitions. Today his rating is higher and higher at auction houses.
Product Compare (0) 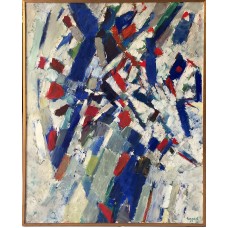