Better known as Wifredo Lam (December 8, 1902 – September 11, 1982), was a Cuban artist who sought to portray and revive the enduring Afro-Cuban spirit and culture. Though he was predominantly a painter, he also worked with sculpture, ceramics and printmaking in his later life. In 1929, he married Eva Piriz, but both she and their young son died in 1931 of tuberculosis; it is likely that this personal tragedy contributed to the dark nature of his work.

In 1923, Lam began studying in Madrid under Fernando Álvarez de Sotomayor y Zaragoza. During the 1930s, Lam was exposed to a variety of influences. At the outbreak of the Spanish Civil War, he sided with the Republicans and used his talent to fashion Republican posters and propaganda. Lam moved to Paris. He quickly gained the support of Picasso, who introduced him to many of the leading artists of the time. With the outbreak of World War II and the invasion of Paris by the Germans, Lam left for Marseille, France, in 1940. In 1941, Breton, Lam and Claude Lévi-Strauss, accompanied by many others, left for Martinique, only to be imprisoned. After forty days, Lam was released and allowed to leave for Cuba, which he reached in midsummer 1941.
Product Compare (0) 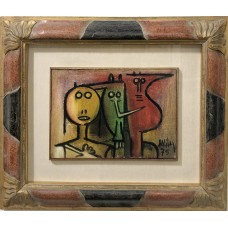