Jules Émile Élisée Maclet (12 April 1881–23 August 1962) was a French Impressionist painter, particularly known for his views of Montmartre. Maclet was born the son of a gardener and a laundress at Lihons in the Santerre region in Picardy. His family was poor and he began work very young as an assistant to his father. His father was also the sexton of the local parish church, where Maclet became a choirboy. The parish priest, Father Delval, was also an amateur painter, and often on fine Sundays he took the boy out to sketch and paint in the countryside. He died in the Lariboisière Hospital in Paris on 23 April 1962 and is buried in the cemetery at Lihons next to his parents.

When war broke out in 1914, Maclet served as a medical attendant in a temporary hospital run by the Little Sisters of the Poor. When the war ended in 1918, Maclet returned to Montmartre. He found great supporters in the famous writer Colette and the American art dealer Hugo Perlsall, who regarded him as the equal of other great painters of the period. In 1923 Maclet entered into a contract with a wealthy Austrian manufacturer, Baron von Frey, a condition of which was that he should leave Paris for the south of France. Maclet stayed in the region from 1924 to 1928. At the end of 1928, Maclet went to paint in Corsica.
Product Compare (0) 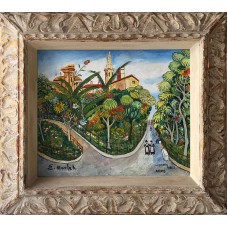 Signed and Titled on Front