Leonardo Nierman (born November 1, 1932), full name Leonardo Nierman Mendelejis, is a Mexican artist mostly known for his painting and sculpture. Nierman has had exhibitions in Mexico and abroad and over sixty recognitions of his work, half of which are from outside Mexico. His work is abstract but still with discernible images from nature such as birds, water, lightning and more. His paintings are in pure colors while his sculptures are generally of metal, often silver-toned.

He began his career painting when he convinced the dean of the business school where he was a student, to paint a mural at the department's auditorium in 1956. Since then, he has had over 100 exhibitions in the Americas, Asia, Australia and Europe. In 1969 he painted a mural for the physics department at Princeton as well as designed the stained glass windows for Temple Beth Israel in Lomas de Chapultepec . In 1997 he created a limited edition postage stamp for the Mexican postal service. In 2003 he received the Gloria Award from the International Latino Cultural Center in Chicago. In 2010 he received the Vasco de Quiroga Medal from the Mexico City government. UNAM named a classroom designed for cultural activities after the painter in 2011.
Product Compare (0) 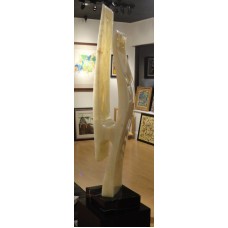 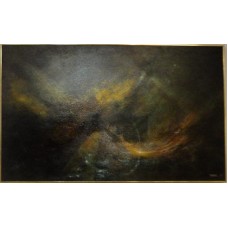 Onyx Sculpture on Black Granite Base