Pouget was born in 1923 in Oran, Algeria, where he studied at L’Ecole des Beaux-Arts d’Oran. In 1946 he was accepted into the École des Beaux-Arts de Paris, however, after only a week he decided to leave the school as he found it too conventional. Paris would remain his home for the rest of his life, and he quickly became involved in the avant-garde circle, developing strong affinities with abstract expressionists and later, with the COBRA Group, who would pave the way in Europe for the development of a type of informal art with highly expressive features, while maintaining a social, and philosophical commitment. 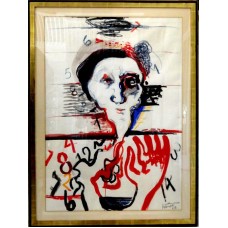