Bernard Quentin was a painter, sculptor and visual artist belonging to the School of Paris, born on the 22nd of June 1923 in Flamicourt (Somme). His work, mostly exploring writing and spelling, is called semiotic art or scriptural art. Bernard Quentin arrived in Paris around 1940 to study painting, sculpture and architecture at the Ecole Nationale des Arts Décoratifs and the Ecole Nationale des Beaux-Arts.

His first exhibition in 1945 at the Maison de l’université in Paris, was roaming in Switzerland in 1946. In 1954, Bernard Quentin took a journey to South America (Brazil and Peru), West Africa (making murals in Niamey and Bamako), and shortly thereafter, in several European capitals (Warsaw , Moscow, Prague). In the 1960s, Bernard Quentin expanded his investigations from painting to sculpture by running totem statues and especially its first inflatable sculptures (the Cybules, the Venus of Chicago). In 1962 for a period of two years, as part of an agreement with the Research Centre Olivetti, moving his work towards new technologies and computer science. In 1977, Bernard Quentin created with Jesus Rafael Soto, Jean Messagier, Jean-Pierre Raynaud, Pierre Restany and Serge Rezvani, the collective Art + whose purpose was to extend art in monumental integrations to the environment.
Product Compare (0) 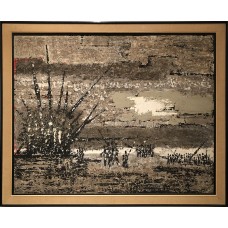